Today I want to talk about relationships between monoids. These can be useful to think about when we’re developing libraries involving monoids, and we want to express some algebraic laws among them. We can then check these with automated tests, or indeed prove them with algebraic reasoning.

This post kind of fell together when writing notes on chapter 10, “Monoids”, of Functional Programming in Scala. I am putting it here so I can reference it from the chapter notes at the end of the book.

So every String maps to a corresponding Int (its length), and every concatenation of strings maps to the addition of corresponding lengths.

The length function maps from String to Int while preserving the monoid structure. Such a function, that maps from one monoid to another in such a preserving way, is called a monoid homomorphism. In general, for monoids M and N, a homomorphism f: M => N, and all values x:M, y:M, the following equations hold:

The |+| syntax is from Scalaz and is obtained by importing scalaz.syntax.monoid._. It just references the append method on the Monoid[T] instance, where T is the type of the arguments. The mzero[T] function is also from that same import and references zero in Monoid[T].

This homomorphism law can have real practical benefits. Imagine for example a “result set” monoid that tracks the locations of a particular set of records in a database or file. This could be as simple as a Set of locations. Concatenating several thousand files and then proceeding to search through them is going to be much slower than searching through the files individually and then concatenating the result sets. Particularly since we can potentially search the files in parallel. A good automated test for our result set monoid would be that it admits a homomorphism from the data file monoid.

Sometimes there will be a homomorphism in both directions between two monoids. If these are inverses of one another, then this kind of relationship is called a monoid isomorphism and we say that the two monoids are isomorphic. More precisely, we will have two monoids A and B, and homomorphisms f: A => B and g: B => A. If f(g(b)) == b and g(f(a)) == a, for all a:A and b:B then f and g form an isomorphism.

For example, the String and List[Char] monoids with concatenation are isomorphic. We can convert a String to a List[Char], preserving the monoid structure, and go back again to the exact same String we started with. This is also true in the inverse direction, so the isomorphism holds.

Other examples include (Boolean, &&) and (Boolean, ||) which are isomorphic via not.

Note that there are monoids with homomorphisms in both directions between them that nevertheless are not isomorphic. For example, (Int, *) and (Int, +). These are homomorphic to one another, but not isomorphic (thanks, Robbie Gates).

If A and B are monoids, then (A,B) is certainly a monoid, called their product:

To answer this, we need to know the precise meaning of product and coproduct. These come straight from Wikipedia, with a little help from Cale Gibbard. 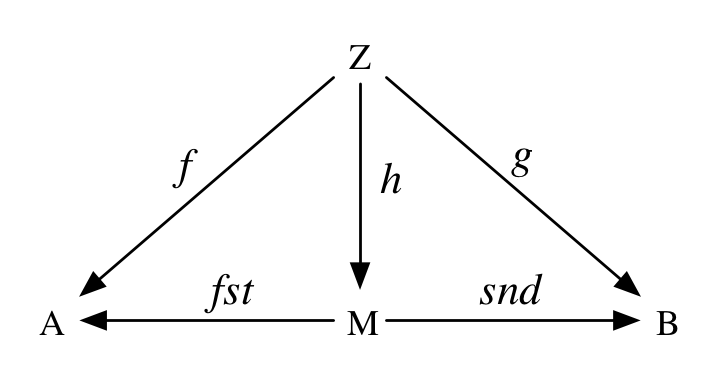 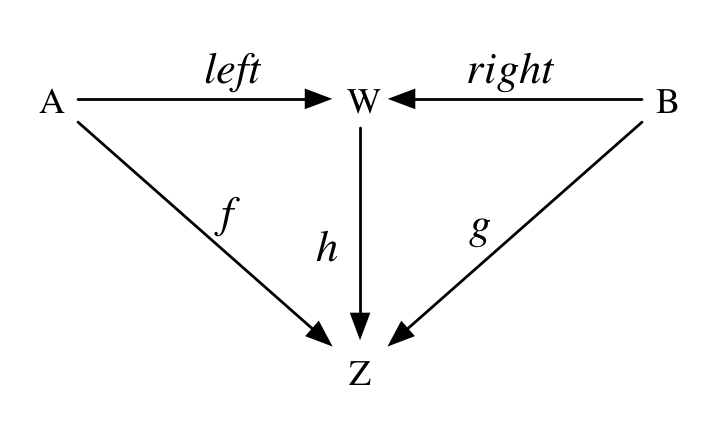 We can easily show that our productMonoid above really is a monoid product. The homomorphisms are the methods _1 and _2 on Tuple2. They simply map every element of (A,B) to a corresponding element in A and B. The monoid structure is preserved because:

What does a coproduct then look like? Well, it’s going to be a type C[A,B] together with an instance coproduct[A:Monoid,B:Monoid]:Monoid[C[A,B]]. It will be equipped with two monoid homomorphisms, left: A => C[A,B] and right: B => C[A,B] that satisfy the following (according to the monoid homomorphism law):

And additionally, for any other monoid Z and homomorphisms f: A => Z and g: B => Z we must be able to construct a unique homomorphism from C[A,B] to Z:

Right off the bat, we know some things that definitely won’t work. Just using Either is a non-starter because there’s no well-defined zero for it, and there’s no way of appending a Left to a Right. But what if we just added that structure?

The underlying set of a monoid A is just the type A without the monoid structure. The coproduct of types A and B is the type Either[A,B]. Having “forgotten” the monoid structure of both A and B, we can recover it by generating a free monoid on Either[A,B], which is just List[Either[A,B]]. The append operation of this monoid is list concatenation, and the identity for it is the empty list.

Clearly List[Either[A,B]] is a monoid, but does it permit a homomorphism from both monoids A and B? If so, then the following properties should hold:

Well, the fact is that List[Either[A,B]] is not exactly the monoid coproduct of A and B. It’s still “too big”. The problem is that we can observe the internal structure of expressions.

What we need is not exactly the List monoid, but a new monoid called the free monoid product:

Eithers[A,B] is a kind of List[Either[A,B]] that has been normalized so that consecutive As and consecutive Bs have been collapsed using their respective monoids. So it will contain alternating A and B values.

The only remaining problem is that a list full of identities is not exactly the same as the empty list. Remember the unit part of the homomorphism law:

This doesn’t hold at the moment. As Cale Gibbard points out in the comments below, Eithers is really the free monoid on the coproduct of semigroups A and B.

We could check each element as part of the normalization step to see if it equals(zero) for the given monoid. But that’s a problem, as there are lots of monoids for which we can’t write an equals method. For example, for the Int => Int monoid (with composition), we must make use of a notion like extensional equality, which we can’t reasonably write in Scala.

So what we have to do is sort of wave our hands and say that equality on Eithers[A,B] is defined as whatever notion of equality we have for A and B respectively, with the rule that es.fold[(A,B)] defines the equality of Eithers[A,B]. For example, for monoids that really can have Equal instances:

So we have to settle with a list full of zeroes being “morally equivalent” to an empty list. The difference is observable in e.g. the time it takes to traverse the list.

Setting that issue aside, Eithers is a monoid coproduct because it permits monoid homomorphisms from A and B:

And fold really is a homomorphism, and we can prove it by case analysis. Here’s the law again:

If either of e1 or e2 is empty then the result is the fold of the other, so those cases are trivial. If they are both nonempty, then they will have one of these forms:

In the first two cases, on the right of the == sign in the law, we perform a1 |+| a2 and b1 |+| b2 respectively before concatenating. In the other two cases we simply concatenate the lists. The ++ method on Eithers takes care of doing this correctly for us. On the left of the == sign we fold the lists individually and they will be alternating applications of f and g. So then this law amounts to the fact that f(a1 |+| a2) == f(a1) |+| f(a2) in the first case, and the same for g in the second case. In the latter two cases this amounts to a homomorphism on List. So as long as f and g are homomorphisms, so is _.fold(f,g). Therefore, Eithers[A,B] is a coproduct of A and B.